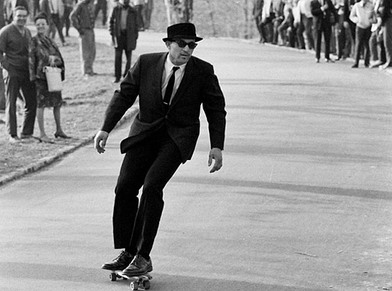 Man skateboarding in New York, 1960. Taken by Bill Eppridge.
1950s:
Although it is not certain where exactly skateboarding first started, most people will pinpoint southern California, especially beach cities such as Newport Beach, as the birthplace of skateboarding. Sometime around the 1950s, surfers found that on the days when the surf was not ideal to paddle out into, could replicate the feeling of surfing on concrete by riding on wooden planks with clay roller skate wheels attached under it.

1960s:
By 1963 skateboarding fully recognized as the new fad among young people. The sport was embraced not only by kids, but adults were hopping on boards and riding around on this new, novel idea. Large surfboard companies such as Jack's Surfboards and Hobie were not only producing large quantities of boards but also holding downhill slalom and freestyle competitions garnering more interest towards the sport.

1970s:
Towards the late 1960s skateboarding saw decline in sales, mostly credited to the clay wheels, which were rough and anything but safe. But in 1972 skateboarding saw another revolution. Frank Nasworthy invented the urethane wheel which improved the speed, quality, and reliability of the skateboard. No longer were skateboards clunky and susceptible to every crack and small pebble on the road. Subsequently, in Del Mar California, skateboarders found that they could further recreate the sensation of surfing by riding the transitions of empty pools and with that skateboarding was met with another boom. Skateboarding legends Tony Alva, Jay Adams, and Stacy Peralta formed the Zephyr skate team and now skateboarding had an image for which kids could look up to and try to replicate. Skateboards also moved away from the flat board and the kick tail was added to the back of the board to add to maneuverability. Skateparks were being built and in 1978 skateboarding was arguably met with it's biggest innovation. Alan Gelfand (nicknamed "Ollie") created a trick in which he would slam his back foot down on the kick tail and the board would magically lift off the ground with the skater and the full potential of skateboarding became possible.

1980s & 1990s:
Skateboarding began to grow as an anti-establishment subculture and started to move away from the surf culture from which it was born. Giant half-pipes were built and skateboarders began jumping down stair sets and grinding down handrails. A second kick-tail was added to the nose of the board making these new maneuvers possible. Skate teams were formed to push this anti-establishment image and kids were now looking up to these cool young guys who could grind down huge rails and catch big airs on thirty foot ramps. From the 1980s to 1990s the anti-establishment image of skateboarding transitioned from ramps to street skating. Skateboarders were generally from lower income families and would convene in places such as Love Park in Philadelphia. The novelty of seeing skaters jumping down stairs and grinding on ledges soon lost its luster as people realized there was serious injury involved and that the constant grinding would cause property damage. However, skateboarding continued to grow in popularity in concurrence with the rise of punk rock music and a generation of unsatisfied youngsters. In 1995 ESPN holds the first X-Games and fully launched the sport into the mainstream.

Skateboarding in Newport Beach, 2012. Taken by Brian Tran.
2000s:
Skateboarding can be found in all parts of the world, according to the Surf Industry Manufacturers Association (SIMA), in 2008 U.S. retail sails alone reached $7.2 billion. Vans reaches $1 billion in sales as of 2012 and publicly traded corporations begin to hold skateboarding competitions, such as Park Lane Sports Investment Banking with their Street League competition. Skateboard competitions have become much more structured as now they are treated in the same regard as other mainstream sports competitions, with panels of judges with standardized scoring methods and lots of money involved in the planning and execution of these competitions. But all money-talk aside, the popularity of skateboarding is more true than ever, just take a walk around campus and everywhere you go you will see at least one person skateboarding through campus. In almost any U.S. city you will be able to find a skatepark or a skateshop, as you will also find ledges with metal caps on them to prevent skateboarders from grinding on them. Although the possibilities on a skateboard have definitely branched out significantly since the days of clay wheels, the fact that it is great transportation and fun to do with friends have stayed true.